Domestic Violence Awareness Month (DVAM) evolved from the “Day of Unity” held in October 1981 and conceived by the National Coalition Against Domestic Violence. The intent was to connect advocates across the nation who were working to end violence against women and their children. The Day of Unity soon became an entire week devoted to a range of activities conducted at the local, state, and national level. The activities conducted were as varied and diverse as the program sponsors but had common themes: Mourning those who have died because of domestic violence, Celebrating those who have survived, and Connecting those who work to end violence.

The first Monday of October 2017, the Sault Ste. Marie City Commission helped us celebrate by making a proclamation that the issue of domestic violence is important to each and every commissioner and it will not be tolerated. Even though DV Awareness month is celebrated in October, we believe this issue is important to educate on throughout the entire year. 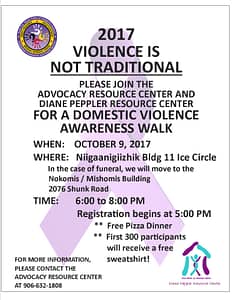 Please join us on October 9th for the Annual DV Walk as we raise awareness with our sisters in the movement, the Sault Ste. Marie Tribe of Chippewa Indians Advocacy Resource Center. We will start registration at 5:00pm and the walk starts at 6:00pm. We will be meeting at the Niigaanigiizhik Building on Ice Circle Drive. The first 300 registrants will get a hooded sweatshirt. We will have food and beverages, hope, love, and fellowship.

Together, we can end domestic violence

Welcome, thanks for visiting our site.

If you or someone you know has been abused, call us.

It’s never to early, or too late, to get help. Resources for Survivors

If you are a member of our community and wish to volunteer, donate,  or need more information on how to  help  victims, please check out our  How to Help Page.

Join Us in saying:
ENOUGH!